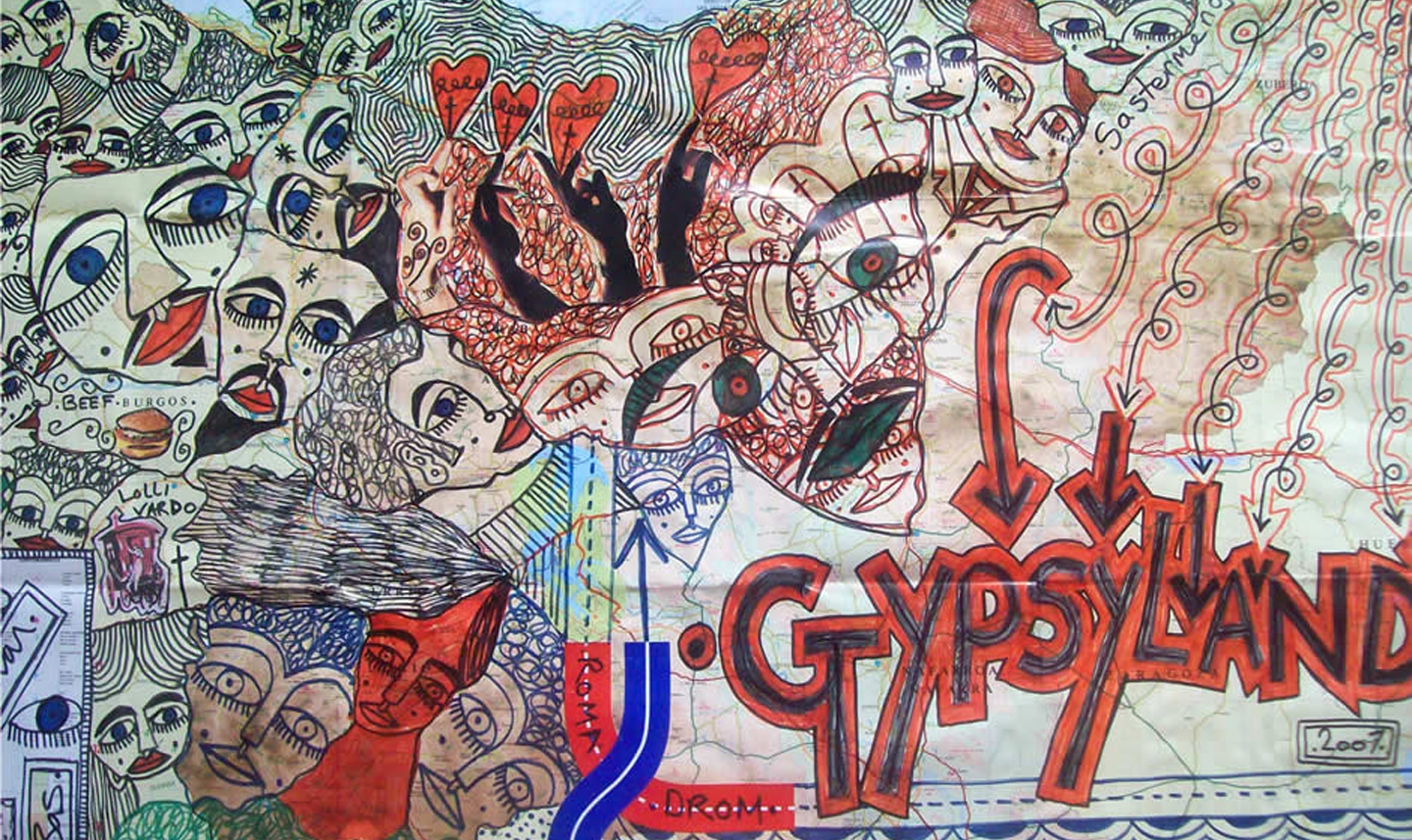 “I’m literally putting Gypsies on the map,” Damian Le Bas would say of his cartographic representations of Europe as seen from a Roma perspective. One such work was Safe European Home 1938 (2013), in which Le Bas redrew a map of Europe to include his trademark Gypsy portrait heads across every inch of the continent, their features marked by coastlines and rivers and borders, all interlocking, a repetition of eyes, eyelashes, noses and lips from the Baltic to the Balkans. At first it seems like witty pattern-making, until the viewer notices the somewhat more sinister text, “Gypsys Everywhere”, floating in the Mediterranean.

As a leading member of the “Outsider Art” movement, Le Bas was one of 16 artists to take part in the first Roma and Sinti pavilion Paradise Lost at the Venice Biennale in 2007. His work often involved drawing over maps of Europe, reconfiguring borders with pen drawings of stylised faces, sometimes interspersed with horses and cars — symbols of movement and modes of transport for this nomadic group.

One of his most affecting works was Violetta & Cristina, a piece responding to the deaths of two Roma sisters who drowned off a beach in Naples in July 2008. Their bodies lay beneath beach towels for three hours while members of the public continued to enjoy the sand, sea and sun around them. Le Bas’s piece consists of two colourful beach towels lying flat at the feet of two brightly striped deck chairs, accompanied by a newspaper article.

In Britain his work came to prominence in 2013, when the New School House Gallery in York featured Le Bas and his wife, Delaine, in the Black Butterflies exhibition, its title referring to the emblems scratched into the walls of the Nazi death camps by Romani, Sinti and Gypsy prisoners.

They returned to York the next year with their son, also called Damian, when the gallery commissioned the family to take part in a residency called Grace in Thy Sight, living in a trailer on the green known as the Eye of York, which is surrounded by the crown court, the Castle Museum and Clifford’s Tower.

Robert Teed, the gallery owner, recalled how on their first morning security officers from the court marched over demanding to know what they were doing. Le Bas replied that they had permission to stay for a month. “After which, all the court security could do was stand every morning, arms folded and legs akimbo, under the crown court’s neo-classical portico and glare down at our artists in residence,” said Teed.

One of the first works that Le Bas created there was a series of huge eyes on the side of the shack that he had constructed on the Eye of York, delighting in the fact that “eye” in English Romany is “Yorkie” and that the first thing the judges would see peering from their chambers would be huge, unblinking Yorkies returning their stare.

Damian John Le Bas was born in Sheffield in 1963, descended from Manouche, Huguenots, Irish travellers, pirates and English Romanies who lived in the grounds of Chatsworth House in Derbyshire. His parents had various occupations and at one time his father was a caravan salesman. He had a brother, Julian, known as Fred, a sister Marianne, who predeceased him, and a half-brother and half-sister.

From a young age he was showing artistic talent. “I started drawing football crowds when I was six,” he told The Observer in 2000. “I was fascinated by the patterns and colours.” The family moved “off-road” in the 1970s, settling in Worthing, West Sussex. He attended Chatsmore High School, but such was his exuberance for life that he was invited to leave early.

A friend who worked in the local job centre noticed how he never stopped drawing and arranged for him to attend an interview at West Sussex College of Art and Design, where he was accepted. This in turn led to the Royal College of Art, where he studied textiles, graduating in 1987. There Le Bas would draw the tattoos on builders’ arms rather than classic designs, and embroider denim jackets with sequinned abstract designs. He recalled one particularly frustrating class visit to the V&A, where the students were expected to be inspired by the exhibits, but he was only interested in the workmen outside. He was mentored by George Melly, and his work appeared in several Oustider Art exhibitions in the 1980s and 1990s.

In 1984 he married Delaine, a fellow artist from a large south-coast Roma family whom he had met at college. She survives him with their son, Damian “Danes” Le Bas, who is a poet, writer and editor of Travellers’ Times. The family home in Worthing was filled with gnomes, Elvis memorabilia, football collections, soul records and art.

The couple worked on long-term projects in Europe and designed the set for the production of Roma Army that is playing in the latest season at the Gorky theatre in Berlin. His exhibition Gateway to Paradise opens at the city’s Kai Dikhas gallery on January 27, once again “putting Gypsies on the map”.